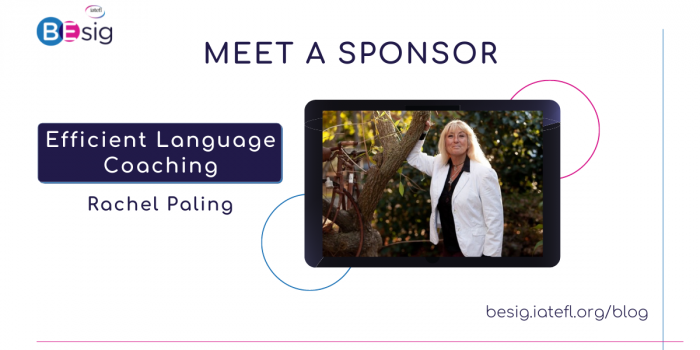 Efficient Language Coaching Global was founded in 2008, initially as language provider for companies/private individuals in Germany, but also worldwide. Later it also developed as a central certification body, with the idea of creating a worldwide network of like-minded language coaches, all with different professional backgrounds, with good teaching qualifications or experience and in addition with the added dimension of coaching qualifications.

As a Gold Sponsor during our first IATEFL BESIG online conference in 2020, Efficient Language Coaching (ELC) offered a showcase in our virtual Exhibition Room. What was your experience with this online format? Which advantages did you find?

I think 2020 was a year full of firsts for everybody. It was our first time as a Gold sponsor for any conference, and it was phenomenal to do this for IATEFL BESIG. I thought it was extremely well organised as an online conference, extremely well handled, had great content and variety, with the added advantage that online brings global accessibility and connection. Yes, face-to-face conferences are a fantastic experience, but an online conference means that like-minded people from all over the globe get to connect, network and enjoy such a terrific conference. For ELC, it was wonderful to be able to sponsor and contribute towards enabling this worldwide access.

What were the most frequent questions and requests from conference delegates?

For us, the most frequent question was and still is “what is coaching?”, and it is a very interesting question because, in fact, there is not just one answer. There are many different concepts of coaching worldwide, ranging from the academic to the commercial and International Coaching Federation (ICF) perspectives. When I began the ELC Language Coaching certification for Neurolanguage Coaching in 2012, I foresaw the importance of bringing professional coaching training into the language arena. Many people at the conference last year, in addition, were asking about the ICF accreditation, coaching training, and the differences between life coaching and language coaching, and between language coaching and Neurolanguage coaching.

What do you expect from this year’s annual conference?

This year, most people are now accustomed to the online conference format and I think more people are versed in handling technology and will be much more relaxed to sit back and enjoy watching and participating. I fully expect delegates to be connecting worldwide and I am very much looking forward to networking and catching up with many of you. I also think that every year the participant contributions are extremely useful, interesting and helpful for business trainers of all different levels and markets. I’m also looking forward to some interesting opinions and input relating to the business English arena through the pandemic, to discover how not only the trainers have come through such a difficult period but also their clients and companies. I think we can all learn a lot from each other about resilience.

How did Efficient Language Coaching deal with these months of the pandemic?

Honestly, my greatest desire over these past 18 months has been to help language educators to understand more about the brain, the way we learn and how neuroscience and coaching conversations, models and techniques can all contribute to making a difference to the learning process. When there are thousands and thousands of language trainers all offering their services online, the biggest question for all of us is how to be different. In addition, I was aware that many trainers would be struggling to survive if companies were not fully operating, so we slashed our prices, created more and more additional support relating to marketing and business for our coaches, and we provided free ongoing workshops and regular events to touch base for Neurolanguage coaches worldwide.

What is the benefit of Neurolanguage coaching for learners?

The greatest benefit is how personalised and tailor-made the whole learning process becomes. When we fully understand that every brain is unique and every person, through their own perspective, may learn in a totally different way and we are able to create a unique process for each person or group, that is when a personalised approach is really fully appreciated by the learner. In addition, throughout the process we offer what I call the “golden nuggets” of neuroscience, talking to our learner about how the brain reacts and functions in general terms, as well as how the brain likes to learn, plus troubleshooting learner blocks and difficulties through experienced and skilful coaching conversations. We also have a unique way of guiding any learner through grammatical areas using the PACT PQC (P – Placement; A – Assessment; C – Conversation; T – Teach; PQ – Powerful Questions; and C – Clarification), which I created especially as an interactive, highly effective, brain-friendly coaching model for “teaching”.

What advice would you give someone interested in becoming a Neurolanguage coach?

The first thing I would say would be to connect with some already certified and accredited Neurolanguage coaches to hear their first-hand experience of the course, their journey through it, and their transformation and transition. Secondly, I would say to research what we have done over the past nearly 10 years, to see how much we have developed and progressed, and definitely to connect with me or any of my team to clarify any doubts or misunderstandings if there are any questions.

Our courses really are very different to anything on the market at present. They encompass many aspects of professional coaching and integrate neuroscientific findings as well as emotional intelligence and neuropsychology in practical terms. We work with a process that has a concrete framework and structure while at the same time promoting certainty, flexibility and adaptability to each and every learner.

Neurolanguage coaching is a field with rising interest among teaching professionals. What can Efficient Language Coaching offer to support business English teachers?

We offer free of charge access to the Neurolanguage Coach Network which is a worldwide platform for coaches to advertise their services. I personally offer bimonthly training and workshops free of charge, plus we give marketing support and workshops to help develop as a business or as a micro entrepreneur. The ELC team and I are absolutely dedicated to helping all our coaches get their language coaching business up and running. In addition, ELC is working more and more with global companies seeking to develop their employees with a faster and more efficient process, and in turn ELC is bringing these company’s requests to Neurolanguage coaches. We are continually expanding this service to provide more and more streams of work for our Neurolanguage coaches worldwide.

Slobodan Kelecevic It's nearly June which means it's…

The Future of Soft Skills with Emma Sue Prince

In May, Emma Sue Prince delivered a…

Welcome to the BESIG Blog. We have different guest bloggers and interviewees lined up who will be sharing thoughts and experiences on teaching business English from countries around the globe.

More posts
Get involved in the business of English today!
Join Now